A 529 Plan is an education savings plan operated by a state or educational institution designed to help families set aside funds for future college costs.  It is named after Section 529 of Internal Revenue Code that governs these types of savings plans, which were created by Congress in 1996.

In the federal tax reform legislation passed into law in December 2017, Congress and the Trump administration expanded the use of 529 plan savings beyond qualified higher education expenses to now include tuition for elementary and secondary (K-12) education.

Anyone can establish a 529 savings account, which would make that person the account custodian, and which would be established for the purpose of meeting the qualified education expenses of the individual designated beneficiary of the account, that is, the student or future student.

Any person can set up a 529 account and name anyone as the beneficiary, including a relative, a friend, or even the person (i.e., the custodian) who set up the account.  There is no limit to the number of 529 accounts an individual can establish.  In addition, a student, or future student, can be the designated beneficiary of more than one 529 account.

No.  You open a single 529 account for each child.  That account now may be used for both purposes.

If you already have an account for your child, your child is considered the “designated beneficiary” of that 529 account. It is not necessary to establish another account because of the law’s change that expanded the definition of qualified expense to include tuition for elementary and secondary education.

No. Elementary and secondary school tuition does not apply to schooling below the level of kindergarten; that is, the change in law did not apply to early childhood or pre-kindergarten education.

Federal law requires 529 plans to have overall limits.  Accordingly, individual states have lifetime donation limits ranging from $235,000 to $500,000. In addition, most states offer state income tax deductions for annual donations up to $5,000 ($10,000 if married filing jointly).

Additional information on individual state 529 plans can be found at www.savingforcollege.com, which provides an interactive U.S. map where you can examine the features of each state’s plan.

There are no limits for annual withdrawals for eligible higher education expenses.

For elementary and secondary school tuition, an annual maximum of $10,000 per student may be withdrawn.

No.  There are no income restrictions whatsoever on family income of the child or on the income of any contributor who is not part of the family.

Each 529 account must have a single designated beneficiary. Accordingly, parents with more than one child who wish to save for their respective education expenses using a 529 account must establish an account for each child.

You can rollover the unused amounts in a 529 plan to another family member of the original designated beneficiary, including a spouse, sibling, the spouse of a sibling, or any first cousin. Rollovers to a non-family member beneficiary would incur taxes and penalties.

If there is no other family member to rollover the 529 proceeds, some state plans allow them to be given the original beneficiary which would be subject to taxes.

No.  Any growth in the account is tax free on your federal tax returns and there is no federal taxes on any qualified withdrawals, but the initial contributions do not qualify for any federal tax deduction or tax credit.

Nine states do not levy any individual income taxes at all; thus, the 529 earnings in these states also are not subject to state taxes.   These states are:  Alaska, Florida, Nevada, New Hampshire, South Dakota, Tennessee, Texas, Washington and Wyoming (which has no 529 plan).

The website www.savingforcollege.com has up to date information on the state tax breaks for 529 accounts in each state:  here, which has an interactive map of the U.S. from which you can choose your individual state.

A number of these states are reviewing whether such state deductions or credits will apply to contributions made for K-12 tuition expenses.  You should check with your state tax department.

The website www.savingforcollege.com has up to date information on the state tax breaks for 529 accounts in each state:  here, which has an interactive map of the U.S. from which you can choose your individual state.

Yes, if used for ineligible expenses, for example, other than for eligible higher education expenses or tuition for elementary and secondary tuition.  However, individual state plans likely will vary on their respective tax treatment for the use of 529 withdrawals for such K-12 tuition, as each state reacts to this recent change in federal tax law.

Withdrawals for non-eligible expenses, that is, non-qualified withdrawals, would transform the 529 account into a taxable investment and subject the account owner to taxes.   In addition, if the state allowed for tax-deductible contributions, that portion of the non-qualified withdrawal would generally have to be reported as state “recapture” income.

The initial language approved by the Senate (Dec. 2) and House (Dec. 19) included broader language offered by Senator Ted Cruz. This included a provision that 529 account savings can be withdrawn for expenses in connection with a homeschool.

However, Senate Democrats, led by Senators Bernie Sanders, Patti Murray, and Ron Wyden, filed a narrow procedural complaint concerning the issue with the Senate Parliamentarian that resulted in the homeschooling language being deleted in the final bill. Senate Democrats claimed the provision violated the obscure “Byrd Rule” which applies to bills passed under tax and budget “reconciliation” procedures.

Here is the deleted homeschooling language:

(i) curriculum and curricular materials,

(ii) books or other instructional materials,

(iv) tuition for tutoring or educational classes outside of the home (but only if the tutor or instructor is not related (within the meaning of section 152(d)(2)) to the student),

(v) dual enrollment in an institution of higher education, and

in connection with a homeschool (whether treated as a homeschool or a private school for purposes of applicable State law).’’. 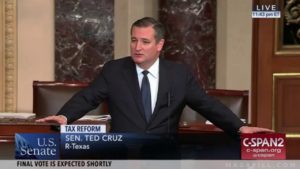